Written by Reece
Get in touch 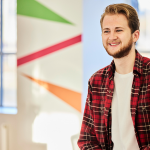 As the latest entry into Flaunt’s ‘Our Team’ series and in celebration of his one-year anniversary, we sat down with our Head of Paid, Adam, for some good old-fashioned chit-chat. Determined not to keep it purely work-related (boringgg) we also tried to ruffle some feathers with questions about the ping-pong hierarchy and tapped into Adam’s inner psyche by asking what he could spend all day talking about on Resting Pitch Face.

Don’t worry, we didn’t swerve the work questions completely and we’re quite glad, actually. Adam’s journey to Flaunt and his outlook on running a team makes for a good read – especially his PPC pet peeves.

Although we could have sat down with Adam at one of his favourite breweries, we decided to haul him into our podcast studio for our questionnaire extraordinaire.

Anyway, let’s get to it.

What’s your role at Flaunt Digital?

More specifically focusing on performance in SERPS, such as Google and Bing. In terms of the tools we use it’s mostly Google ads and Microsoft ads when we’re working on search engine marketing. We aim to get the audience as relevant as possible to drive the best results.

We also do a lot of work on socials like Facebook, Instagram, Youtube, TikTok. TikTok can be slightly different as it’s more focused on CPM (cost per mile) and reach. It’s much more specific to demographics and locations than some of the other platforms.

Trying to explain to my family what I do is a tricky one as they’ll always accuse us of spying on people (retargeting ads that follow you around) but I just tell them, look, you’re going to see ads anyway, so they might as well be ones which are relevant to you!

Good point, is that how you usually go about explaining it in a simple way? – “we’re the spies”

I soften the spying narrative but pretty much, yeah. When I’m talking to family members who don’t get it, I explain that first when you type something into Google and see an ad – that’s us. The annoying ads that follow you around, that’s us. That’s what people resonate with. That’s the lightbulb moment.

In terms of your role as ‘Head of Paid’, how do those responsibilities fit into your day-to-day?

Managing the team, making sure everyone is comfortable with their workload and being on hand if anybody needs help. Longer term, I get more involved in the overarching strategy for our clients, pushing the performance of campaigns and making sure everything is aligned with client KPIs. Generally keeping things ticking over.

So, how did you end up in PPC? What was your “I want PPC tattooed across my back” moment?

Haha, I’m not sure about the tattoo but I’d say I’ve always had an interest in PPC in a sense. I’ve always been interested in writing, which plays a part in the more creative side of advertising.

After uni, I went to my first marketing agency and was a jack of all trades, as such. It was then that I really got a feel for PPC and started to lean into more as a career choice. I then went to another agency after and I’d say that’s when I really found my feet with PPC, getting to grips with the data and how it’s used.

Lot of numbers. I’ve got an A level in maths, though, so I’m not really phased by lots of numbers.

These agencies you worked at could be defined as the start of your journey to Flaunt, then?

Essentially yeah, I worked at a few agencies then went to work with Google as part of their in-house PPC team working with medium-sized businesses. That included setting up and optimising paid activity basically, and also working with businesses that already had paid campaigns in place – we would coach them along.

After Google, I was Head of Paid at a Leeds-based agency called Wolfenden, then of course, made my way over to Flaunt for my 5th marketing/PPC-based role

What was it that made you confident Flaunt was your next destination?

Their energy. The energy of Flaunt came across as soon as I first spoke to them. The guys have a great outlook on the way they want to do business and that excited me.

Aside from the fact we have a bar in the office, how is Flaunt different from other places you’ve worked?

The bar is a big one for sure, haha. No, I’d say the genuine care that you get, from the top down, is unlike anywhere I’ve seen before. There’s such a huge focus on allowing people to thrive and encouraging them to better themselves. There’s a real sense of ‘no matter what happens, you come first’, you know, and you really can’t ask for more.

If you could pluck out one ‘thing’ that’s done well and helps create that culture…?

The way that workload is managed is definitely a huge one, it really helps you do your best work and have no worry of being swamped, should things come in last minute. That then feeds into the flexible working which helps create a really healthy work-life balance.

Having been in the world of PPC for 10 years now, what are your biggest pet peeves? And you can really vent here, so don’t hold back.

The first one that comes to mind is when clients expect you to be able to flick a switch and see results instantly. Sometimes they think that’s how it works when paid media so much more than that. To get the best results you need to be able to produce big chunks of data, which of course takes time.

No time to shine

In a similar vein, one of my pet peeves is when clients lack patience. You explain the process will take time, they give the green light then a few weeks in they’re expecting big things, which can’t always happen.

Another big one for me is sloppiness with ad copy – spelling mistakes, lack of punctuation. People underestimate the importance of copy in paid advertising. If it comes with a video they think that just does all the talking.

I also don’t like when companies go after other competitors and say “didn’t you mean us, we’re better” kind of thing. That cockiness is just a big red flag.

CrossFit is one of my main hobbies, I find getting out of the office and into the gym is a great way of compartmentalising.

I’m also a massive Leeds fan, so you can find me at Elland Road quite often – beer in hand, of course.

Of course. I’ve heard you’re quite the beer connoisseur?

I love a craft beer. I’ve got more favourite breweries than we’ve got time for here, but last year when we couldn’t leave the country I did a bit of a craft brewery tour alongside a staycation in Cornwall. We spent a great day at a spot in Bristol called Left Handed Giant, which we hunted out on our way down. The dog (Arlo) was with us as well, of course, which is standard for most of our road trips.

He’ll have a lick.

Arlo is a familiar face around the Flaunt office and when he’s not recreating the Royal Rumble with Sam’s dog, Harley, you’ll find him snoozing under Adam’s desk.

It’s the question everyone gets asked – where are you in the table tennis hierarchy?

Nah, I’ve had plenty of opportunities to beat the big 3 and bottled it. I’d say I’m the best of the rest.

I think Chris A has mentioned Joe as top dog before?

If you were on the Flaunt podcast (Resting Pitch Face), what topic could you talk all day about?

I think how to get into a PPC career would be a good topic for me – how to work your way up to a head of dept. When I first started you were just told how hard it was to get into an agency, so if back then I had something to put those worries to bed, that would have been really helpful.

What’s one feature the Flaunt office doesn’t have that you could introduce if you could?

Record player, definitely. On a Friday afternoon if we had a collection of vinyl and everyone could pick an album to play in its entirety that would be nice.

Let’s get a petition going. What’s the first album you’d play if it was installed tomorrow?

I’ve always been a massive fan of classic rock, so probably Led Zeppelin IV or maybe a Rolling Stones one?

Great choice. Anyway, cheers for your time. It’s a wrap.

Meet The Rest Of The Team

If you’re eager to meet the rest of our team, you can have a gander at all our lovely faces on the Flaunt website. There’s plenty more where this came from too, as we’ll be delving into the lives of other members of the Flaunt team in this ‘Our Team’ series.

Keep an eye out on our blog or follow us on Instagram for some behind-the-scenes sneak peeks.